Be a Seed for Change 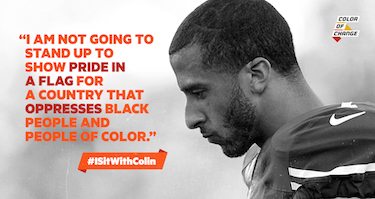 By refusing to stand during the national anthem, San Francisco 49ers’ quarterback Colin Kaepernick is making an important, bold rebuke of police violence against Black people.

Kaepernick joins a long history of Black athletes using their platforms to advance racial and gender justice issues – like Tommie Smith and John Carlos giving the Black Power salute during the national anthem at the 1968 Olympics and Jackie Robinson writing that he could not salute the flag as “a Black man in a white world.”

Colin Kaepernick is demanding that America live up to its own ideals and address the oppression of people of color. To express your support for this brave athlete, please add your name to this short statement, supported by RootsAction and Color of Change.